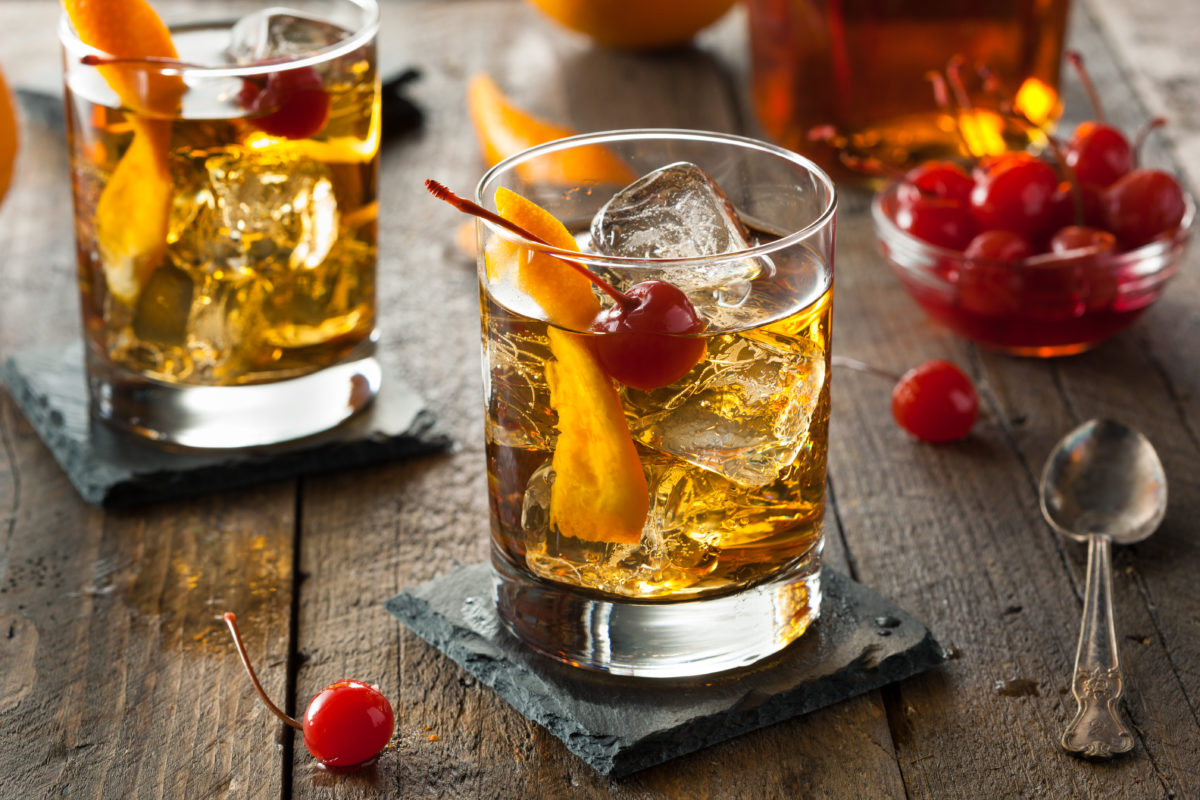 Drop sugar into the bottom of a rocks glass.
Add 3 dashes of bitters and a teaspoon of warm water and stir in glass to dissolve.
Add several large ice cubes and the whiskey.
Stir to chill.
Add orange peel to garnish and serve.

The Old-Fashioned has become as ubiquitous at local watering holes as Tinder dates. It’s so popular in fact that it’s one of the most Googled cocktail recipes and is the most ordered drink in the United States.

The origins of this cocktail go back so far that it’s tough to trust anyone who says they created it. The original drink was aptly named the Whiskey Cocktail for its simplicity and commonality up until the late 1800s. At this time the recipe consisted of something strikingly similar to what we enjoy today. A sugar cube generously wetted with bitters and joined by several blocks of ice. The glass is then warmed by a couple ounces of American whiskey. As my grandma says – what could be bad? It was so simple in fact that it became more of a style of drink than a specific recipe. It wasn’t until 1880 that The Chicago Tribune printed and defined it as an “old-fashioned cocktail.” The name was inspired by the many drinkers who refused to change with the times and ordered their drinks the old fashioned way; a brown spirit, sugar, water and bitters.

After prohibition, our old pal the Old-Fashioned went through a prolonged awkward phase. After the speakeasies had closed and bars reopened, bartenders began altering the classic recipe. They added powdered sugar, soda water and a muddled blend of oranges, cherries and pineapple. (Oh my!) This newly popular drink – under the same name – enraged purists. It was so infamous that in 1936 a letter to the editor of The New York Times ranting on the subject went viral…whatever that means in 1936. And yet, this newly perverse version of the classic soldiered on. The soberingly sweet and effervescent kick was almost a mockery of the original. Nonetheless, it continued to gain popularity and became the new meaning of the Old-Fashioned drink order for decades.

At the turn of the 21st century a general Mad Men effect on the public started to take hold. Americans began to care about cocktails again…and sounding like Don Draper. Bartenders started to become mixologists and the soda guns were holstered. This cocktail renaissance inspired a look back to the history of many classic cocktail recipes. However, none had more of a resurgence than our dear friend the Old-Fashioned. For the first time since prohibition, quality in cocktail became paramount and the true essence of the Whiskey Cocktail in the Old-Fashioned was restored. These days you’ll be hard pressed to find a barkeep that doesn’t know how to mix a proper drink, the Old Fashioned way.

History abridged from ThirstyNest article “The History of the Old-Fashioned”